At the Spine Institute of Arizona, our doctors use Minimally Invasive Surgery procedures that can reduce or eliminate back pain with limited tissue disruption, and quicker recovery times for our patients. With a combined 60+ years of experience, you can have confidence that our Board-Certified Spine Surgeons are committed to providing you the same level of care that they would provide their families. Read below for more information on the types of spine curvature disorders. 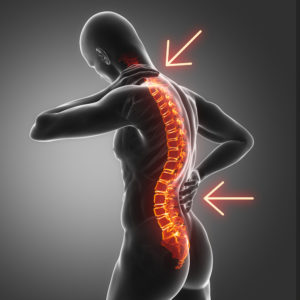 The spine, or backbone, is made up of small bones (vertebrae) stacked — along with discs — one on top of another. A healthy spine when viewed from the side has gentle curves to it. The curves help the spine absorb stress from body movement and gravity.

When viewed from the back, the spine should run straight down the middle of the back. When abnormalities of the spine occur, the natural curvatures of the spine are misaligned or exaggerated in certain areas, as occurs with lordosis, kyphosis, and scoliosis.

What causes spine curvature disorders?
There are a number of health problems that may cause the spine to curve more than normal or be misaligned.

The following conditions can cause lordosis:

Symptoms of lordosis may include:

Treatment for lordosis may include:

The following conditions can cause kyphosis:

Symptoms of kyphosis are usually visible in nature and include:

Treatment for kyphosis may include:

Doctors do not know what causes the most common type of scoliosis seen in adolescents. However, doctors do know that scoliosis tends to run in families. A disease, injury, infection, or birth defect also may be to blame.

Symptoms of scoliosis may include having:

Treatment for scoliosis may include:

If you or a loved one’s back appears to have an abnormal curve to it, beyond just poor posture, see your doctor so that you can be evaluated and treated.