The Spine Institute of Arizona would like to congratulate Tiger Woods on his recent win at the Augusta National Golf Club. In one of the greatest career comebacks, Tiger Woods won his 5th Masters title. Even more remarkable about his win is that it comes two years after a spinal fusion surgery that Woods underwent in 2017. This type of surgery involves fusing the vertebrae that are causing the pain. This surgery has helped Woods reduce his pain and has had no apparent effect on his golf swing…. leading him to another win.

Spinal fusion surgery involves identifying the painful vertebrae in the spine and fusing them together. Essentially, the process involves bonding two painful bones into one stronger, pain-free but less mobile vertebrae. The idea is that by restricting the movement of the individual bones, you should be able to eliminate the pain.

Woods finished the final round of his 22nd Masters appearance 13 under par, winning the tournament by a single stroke over Xander Schauffele, Dustin Johnson and Brooks Koepka, who were tied for second place. 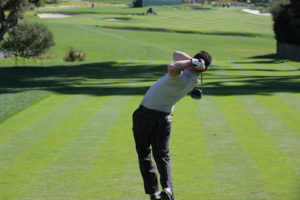 Sunday’s win at Augusta National — where Woods won his first major in 1997 — was his 15th time winning a major. Prior to Sunday, Woods hadn’t won a major championship since his victory at the U.S. open in 2008.

With five Masters titles, he is now just one victory away from tying the record for most Masters wins held by American Jack Nicklaus, who has six. The victory also brought Woods closer to tying Nicklaus’ record of 18 major championships.

The win capped a stunning professional comeback for Woods, who has faced crippling back and leg injuries that led to multiple surgeries and nearly ended his professional golf career. In 2017, he underwent a spinal fusion, his fourth back surgery, with hopes of alleviating the pain.

It was also his first victory at a major since a series of personal troubles that began in 2009 pushed Woods to take a break from the sport.

As the final round of the tournament got off to an early start Sunday morning due to bad weather, it wasn’t clear that Woods would come back from two strokes behind, but he did.

“I was just trying to plod my way along the golf course all day, then all of a sudden I had a lead,” Woods said after his victory. “Coming up to 18, it was just trying to make a five. When I tapped the putt in — I don’t know what I did. I know I screamed.”

As the ball went in, the crowd erupted into applause and chants of “TIGER! TIGER!”