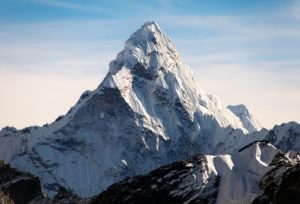 Dr. Ed Dohring, Board Certified Orthopedic & Spine Surgeon at The Spine Institute of Arizona, recently conducted an interview with “CBS This Morning” for climbing Mount Everest and reaching the summit. This, of course, is being recognized as a major accomplishment for him being 62 years old and simultaneously training while still remaining a practicing spine surgeon. However, he talks about how terrifying it actually is now that the mountain is becoming over-populated with un-qualified hikers. Check out the article and video below to learn about his experience!

A Colorado attorney is the latest climber to die on Mount Everest. Chris Kulish collapsed on his way down after reaching the summit, becoming at least the 11th fatality there this season.

CBS News spoke to Dr. Ed Dohring, who was on the same expedition as Kulish and said he was not prepared for what he saw when he got there: Too many people dangerously vying for the same experience.

“That’s what made it scary for me,” Dohring said. “Is that there was a large group on the summit by the time I got there. There was a subgroup that was very rude and unruly and was basically pushing so that they could get better pictures of themselves and I just thought ‘this is not safe.'”

But before you even make it to the top – an icy platform no wider than two ping pong tables – there are traffic jams on the final few feet in an area known as the “death zone.” At that altitude there is not enough oxygen for humans to breathe, so vital supplies are used up while the climbers just wait.

There are too many people navigating too small a space and, according to Dohring, too many of them don’t know what they are doing. He witnessed firsthand that deadly combination.

“I was surprised at how many people were, you know, above 26,000 feet and were really obviously either not fit or not experienced and probably shouldn’t have been there,” Dohring said. “I certainly wasn’t prepared to pass dead bodies that were attached to the safety line. It was very difficult.”

On May 29, 1953, when Sir Edmund Hillary became the first climber to reach the summit with sherpa Tenzing Norgay, it was global news. Sixty-six years on, almost to the day, scaling the world’s tallest mountain has become an Instagram moment. A feat not just for the best – but for almost anyone with a bucket list.

Dohring told us that despite all the well-documented problems on the mountain, he does not think that Chris Kulish died as a result of the overcrowding, nor was he inexperienced. Kulish was extremely fit, even at 62, and was climbing with what he described as probably the best guide team on the mountain.